Mooring 116 has a new tenant for the Winter 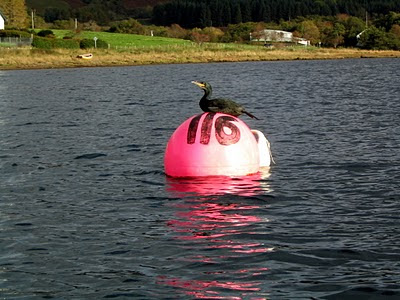 Posted by Ewan at 09:53 No comments: Links to this post

I have a lot of nautical material that is only vaguely connected to the Scottish Islanders, or is of general interest, so I have decided to post this on a separate blog.

You can view the Scottish Boating blog here

My idea is to cover a number of subjects, including the history of yacht design and stories about particular yachts, technical issues of design and construction, including my experiences with the six boats I have built and general pieces about small boat sailing in Scotland and around the Baltic.

At the moment I've got a couple of stories with Scottish and German interest posted. There will be some Scandinavian stuff soon. Please take a note of the URL, scottishboating.blogspot.com

I will be delighted to carry any items that I consider appropriate and will always acknowledge contributions.
Posted by Ewan at 08:41 No comments: Links to this post

I am now researching the racing career of the legendary J Herbert Thom, who really deserves a whole book to himself as one of the most successful racing helms of all time, having proved almost unbeatable in local, national and international competitions.

In the pre-war years Thom won hundreds of races, mainly in the Islands Class and whether sailing his own or one of the other boats. In 1938 he took his new six metre yacht Circe, designed by David Boyd and built the previous year by Robertsons, to Oyster Bay at New York to win the Seawanhaka Cup, which he successfully defended on the Clyde against the Norwegians the following year. Later he was involved in the preparations of the America's Cup challengers Sceptre and Sovereign, but did not helm in either of the actual competitions.

I first heard about Herbert Thom as a sailing-daft child in the 1950s and I know that there are countless stories out there about his meticulous ways, racing tactics and so on. I'm very anxious to record everything and am pretty sure that people a little older than me will have memories they can share.

Alistair Thom has kindly agreed to give me access to his grandfather's archives, so I will have chapter and verse for much of the factual stuff, but anecdotes and memories are what make these projects interesting, so if anyone reading this can help please get in touch.

Herbert Thom was devoted to introducing young people to sailing and there is a fascinating educational film from 1961 on the Scottish Film Archive. The opening sequence shows the man himself on board Canna and apart from the sailing footage the film gives an interesting insight into how attitudes to certain things have changed in quite a short period. I'll refrain from detailed comment so as not to spoil your enjoyment.


Clyde Sailing Video
Posted by Ewan at 08:36 2 comments: Links to this post