Update on the Islanders 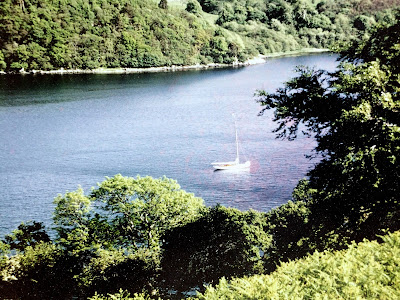 I haven't posted on this blog for a long time, as most of my efforts have been devoted to www.scottishboating.blogspot.co.uk, where you will find an archive of general information, mostly about boats and mostly in Scotland. Meantime my Stroma remains for sale and is safely on shore at Cairnbaan on the Crinan Canal in the care of Adam Way.

I'm determined to sell Stroma, as she really needs someone younger to take her on, but it's quite a wrench after so long. The above image was taken in Loch Craignish during our first season together in 1977.

Yachts in the Islands Class and similar deliver exhilarating, very stylish sailing. They are safe and seaworthy with their long keels and ideal for anyone sailing with a light crew, as the small jib is easy to handle. It's better to have at least one person with you, although they are easy to single hand, as I and many owners have found over the years. I have decided that at my age it's better to do so on something designed for the purpose.


Recently there has been an interesting development, which one hopes will lead to a revival of interest in classic Scottish yachts in general and Islanders in particular. The Clyde Keelboats Association has been formed by a group of enthusiasts with the purpose of saving, renovating and supporting them. In time it's likely that a new generation will come forward to take them on and enjoy them.

The Association has made a great start by buying Sanda and Jura, which are both in need of serious restoration. Both are also now in the care of Adam Way. 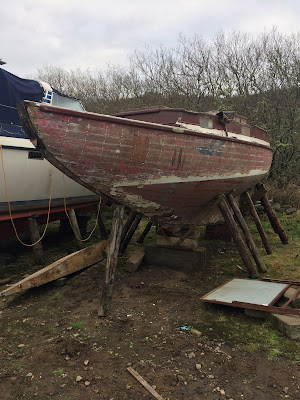 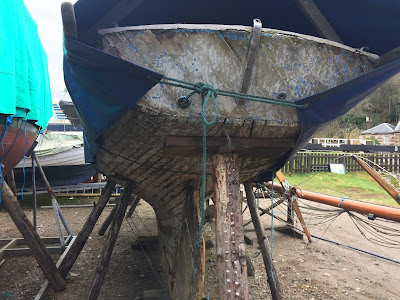 In the meantime Canna, yacht number 10 has been acquired by Richard Thom, grandson of the legendary Herbert, who commissioned her, and beautifully restored, also by Adam Way. You'll find a recent post about her on Scottish Boating. As you will see from that and the preceding post the new generation is starting to arrive on the scene.

Finally on a sad note, Adam Bergius, whose name is intimately linked with the Islanders, recently passed away after a long and wonderful life. His mother was a successful helm pre-War in Jura and Adam told me that on his return from the Far East, expecting to go straight to work in Teachers he found that Jura was his thank you for returning home safely and he took off for a cruise up the West coast with some friends, despite it being October.

I'm sharing a letter he sent me about the Bergius Rosebowl, which I had recently recovered and returned to him. Subsequently three yachts turned out for the event, which ran as part of West Highland Week 2004. Stroma won the series, but as so few of us took part I felt it was more appropriate to return the bowl to Adam in the hope that in time a larger fleet would be assembled. That day may now be approaching! 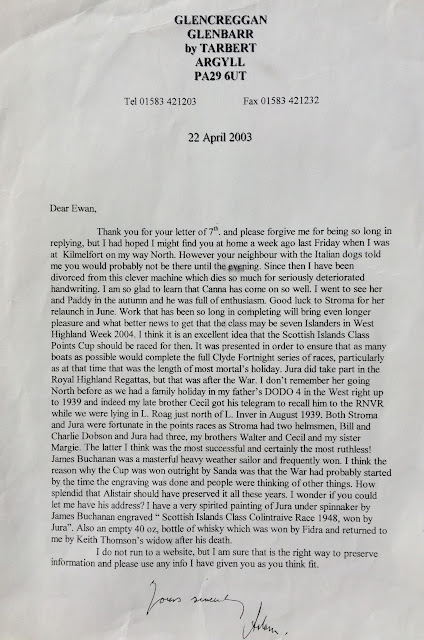 Posted by Ewan at 18:08 No comments: Links to this post