The problem of arranging the seating and sleeping in a narrow hull with limited headroom is one of the main challenges facing the designer of a small yacht's interior. If you want a wide enough berth it has to be positioned so high that you lose headroom for comfortable sitting.
Albert Strange pointed out that the solution has to be separate arrangements for sitting and sleeping, with fold-down cots for the latter.
Stroma's original interior sacrificed headroom for a good sleep and during her restoration I adopted a variation of Strange's system.
It's useful to retain some space at a higher level, so I decided to build a dedicated cooking space to port and a navigation table to starboard, in each case about two feet long, leaving about four feet each side for daytime sitting. I made plywood platforms that notch onto stringers at the outboard side and hang from short lengths of rope from a deckbeam, where I fixed eyebolts. Only one hanger is needed at each side, as the aft end of the platform sits on the cooking and navigation stations.
We sit on benches made from recycled church pews about a foot wide and a foot above the cabin sole.
Albert Strange didn't favour mattresses, but nowadays there are alternatives to horse hair and we have a four foot and a two foot long cushion down each side. The smaller ones are handy in the cockpit if it's not raining. The following rather poor image gives an idea of the set-up. 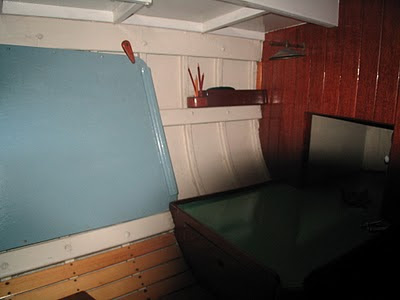