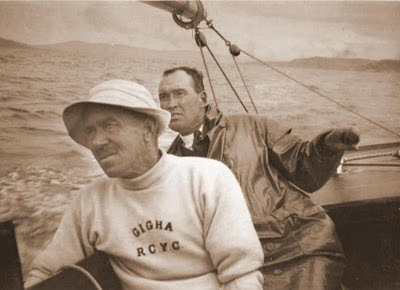 In 1925 Herbert Thom returned to yacht racing after his self-imposed exile of seventeen years. He bought the 19/24 footer Sunbeam, designed by Alfred Mylne and built by Robertsons in 1904 and immediately began to make an impact, finishing second in the class with 14 first places and 7 seconds out of 36 starts. In 1926, 1927 and 1928 he was class champion, ending up with a grand total of 108 placings out of 143 starts aboard Sunbeam. 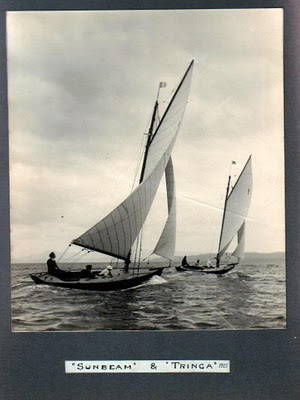 By the winter of 1928 the 19/24s were seen as obsolete. The class dated back to 1897 and after so much hard racing the hulls were tired.  As we have seen in an earlier post the Clyde Clubs Conference that winter enacted the rules for the Scottish Islands Class and the first five of the new yachts were commissioned. Herbert Thom declined to join the Islanders, because he disagreed with the decision to instal engines and the associated rule that if you didn't want one you had to carry equivalent weight and have a useless propellor. Instead he bought Fife 6-metre Lucille, renamed her Susette, came third in 1929 and became champion of the sixes in 1930. The Glasgow Herald noted

"As usual, the contests in the 6-metre class were tremendously keen, and provided excellent sport. Mr J H Thom's Susette headed the A Section and took 24 flags in 39 starts.....Susette took a considerable time to strike her form, but from July 5 onwards she was only twice out of the prize list, and Mr Thom had the satisfaction of winning three races in succession before Fintra and Coral went to America and Finvola was laid up..."

We have seen that by 1930 there were seven Islanders racing regularly and giving very close competition and the one-design nature of this class, in which it was purely helmsmanship that counted, must have appealed. Also James Buchanan had commissioned a new boat that was to  become Iona. Herbert Thom relented and commissioned Gigha from Alfred Mylne's Bute Slip Dock.

I have already provided a detailed report on the 1931 racing season, so for new readers will just repeat part of that post here. Again I quote from the Glasgow Herald's end of season report:-

...Mr J H Thom dominated the Scottish islands class with his new boat, Gigha, which had the score of 29 prizes in 33 starts, including 18 firsts. Her wins included the Bryce Allan Cup, and she also won the Coulson Points Cup. Sanda, last year's champion of the class, was the runner-up with 24 flags in 34 races. In addition she won the McBeth Points Prize at the "Fortnight."


And in  October the anonymous Clyde Notes commented:-


"...Mr J H Thom, with his new boat Gigha was signally successful throughout the season, so much so that the varnished racer- the only one in the class- earned the nickname of "The Yellow Peril." The Islands Class is one-design, and I cannot credit the scarcely veiled suggestions in some quarters that Gigha was something different from the others. Rather do I favour the view that Mr Thom is too good for a local class and would be more in place, as he was last year, in the 6-metre lot."

Subsequent events were to show that there was absolutely no truth in this suggestion. Instead I suggest it is the case that Herbert Thom brought yacht racing, certainly the Scottish variety, and whether professional or Corinthian, into the modern age. He brought the same dedication to his sport as he had done when learning his business after the early loss of his father. He studied every aspect. The major significance of trim we have already noted. He carried this to extremes by requiring crew members to lie down below in calm weather, which must have been hell as such weather would also have been very hot. His yachts were varnished, because this made the topsides lighter, and he had to defend his right to this when other owners argued that a bright or clear finish was not a colour. He let it be known that he carried only a minute amount of petrol aboard, just enough to get to the start and home after the finish.


Some of this was pure psychology, which I guess Herbert Thom greatly enjoyed. An example was his racing flag, the International Code signal for "follow me." Far more important was his habit of meticulous note-taking, which involved recording the courses taken by other boats and their positions at different stages. He also spent time studying the tidal currents and wind patterns in the Firth of Clyde, sometimes from the slopes of the hills behind Gourock and Hunters Quay.


I think there is perhaps only one area where his approach was mistaken. He favoured keeping the rigging slack and omitted the wooden chocks at the mast partners that are usually seen as obligatory. He also believed that a hull should be able to flex, whereas I think the present-day view would be that stiffness is desirable in a small hull.


In summary I suggest that Herbert Thom's approach was simply too scientific and serious for at least some of his competitors. Certainly the record of 29 flags out of 33 starts in a new boat bears this out.


In general we can see that a finishing order has been established by now, with James Buchanan's Sanda the only boat seriously challenging Gigha. Discontent within the class was now at a height, with much rumouring about Gigha being simply a faster boat. George Jackson's Westra had now missed two seasons and he put her up for sale. When Herbert Thom heard that she had been sold to someone on the Solway he persuaded the purchaser to accept his Gigha instead. He would now take on the competition with the oldest boat in the fleet. The Field correspondent reports:-


"On the relative performance of the two boats the exchange may seem somewhat surprising. There is only one explanation I can think of. Allegations were sometimes heard that the success of Gigha was accounted for by her out-size. Remeasurement more than once showed that there was no foundation for these statements, but Mr Thom is a good sportsman and I expect that he has taken this course to remove any unpleasantness, no matter how unjustified."


Part III of this short biography will follow in a few days time.
Posted by Ewan at 12:21